Mistakes happen! Have you worked on a project for a long time only to find out that there is a major flaw?? This was my experience recently.

First of all, I had been letting other aspects of my business take precedence over making art. My wakeup call came when I was talking to my hairdresser the other day. She asked again how I was doing with my hockey boys. I was a little embarrassed to have to say “not much”. I decided right there and then that I would get the last pieces of fabric in place starting that day.  It only took me 2 hours and it was complete! I was elated!!

With the assistance of my husband, I carefully took my “boys” off the design wall. My experience with having this piece on the design wall for a long time is that humidity and Steam a Seam II Lite don’t go well together. A story for another day!

As a result, I had to make sure that all the fabric pieces were back in place before I fused all the applique. A long time later it was done. It felt so good!! I had the design complete!

I hung the piece back on the design wall and moved my work table so that I could take a good long look at it. That was when I realized to my horror that one of the 3 boys had a distinct lean to one side!!! One of those “yikes” mistakes. I was devastated. All that work and now it was ruined. 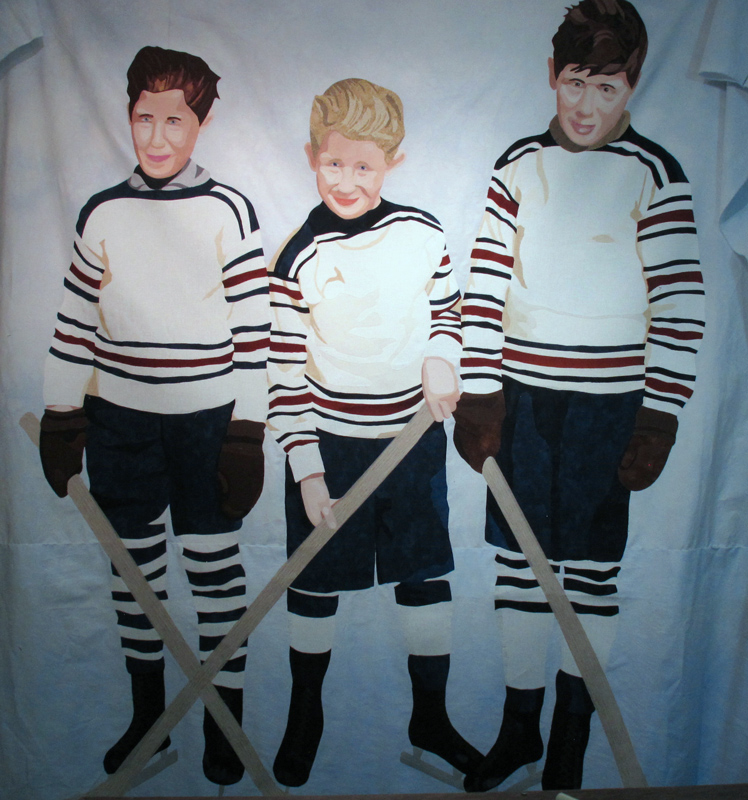 The hockey boys. Look at the guy on the right!

Of course, I did the only thing that made sense. I ranted and raved and cried a few tears. I didn’t even want to look at it.  Over the next few days, I kept going back to take a look and see if it was really as awful as I imagined. Some days I almost convinced myself that it was OK. Other days I was more realistic.

A few days ago I decided that it was time to stop thinking about it and to try and do something about fixing it.  It couldn’t remain as it was. I had decided on a rescue plan.

The decision was to cut from the top of the background right down to the toe of the skate. I was hoping that I could pivot the boy on the right over to the left without distorting anything.  A very deep breath and I started!

I started by cutting the background fabric above and to the right of the boy’s head. I then cut carefully along the line of his hair on the left side, down along the edge of his sleeve and the rest of this clothes and down to the toe of the skate. Managing to loosen the fabric pieces, at the elbow and the hand where the two boys overlapped (see below), made it easier to cut them apart at that point.  I wanted to cut as close to the figure as possible without nicking any of the edges. 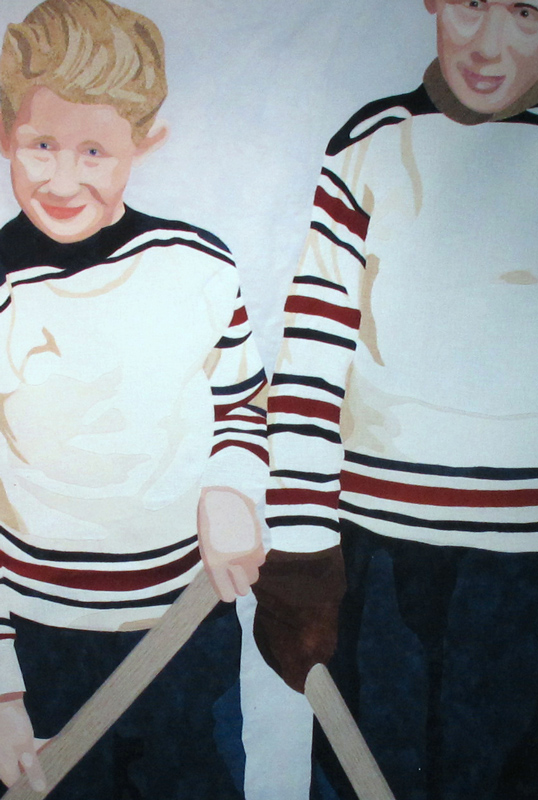 Detail of overlap of sleeves and mitt/hand.

Once I had the boy on the right mostly cut out, I pivoted him towards the boy in the middle so that they overlapped more. I had to cut away parts of the mitt to avoid shadowing and decided that the boy in the middle should have his elbow on top, not underneath as originally planned, which entailed more very careful cutting.

Then I had to adjust the shadow at the elbow of the jersey, for the boy in the middle, by adding some lighter fabric, as now his arm was on top. I used white Elmer’s glue applied in tiny dots to hold the repositioned section in its new position.

It worked!! I am pleased with the result and learned that the hand-dyed fabric that I used for the sky blends beautifully when cut. My hope is that the quilting will help to hide the cut in the fabric.

Here is the after photo. Much improved. 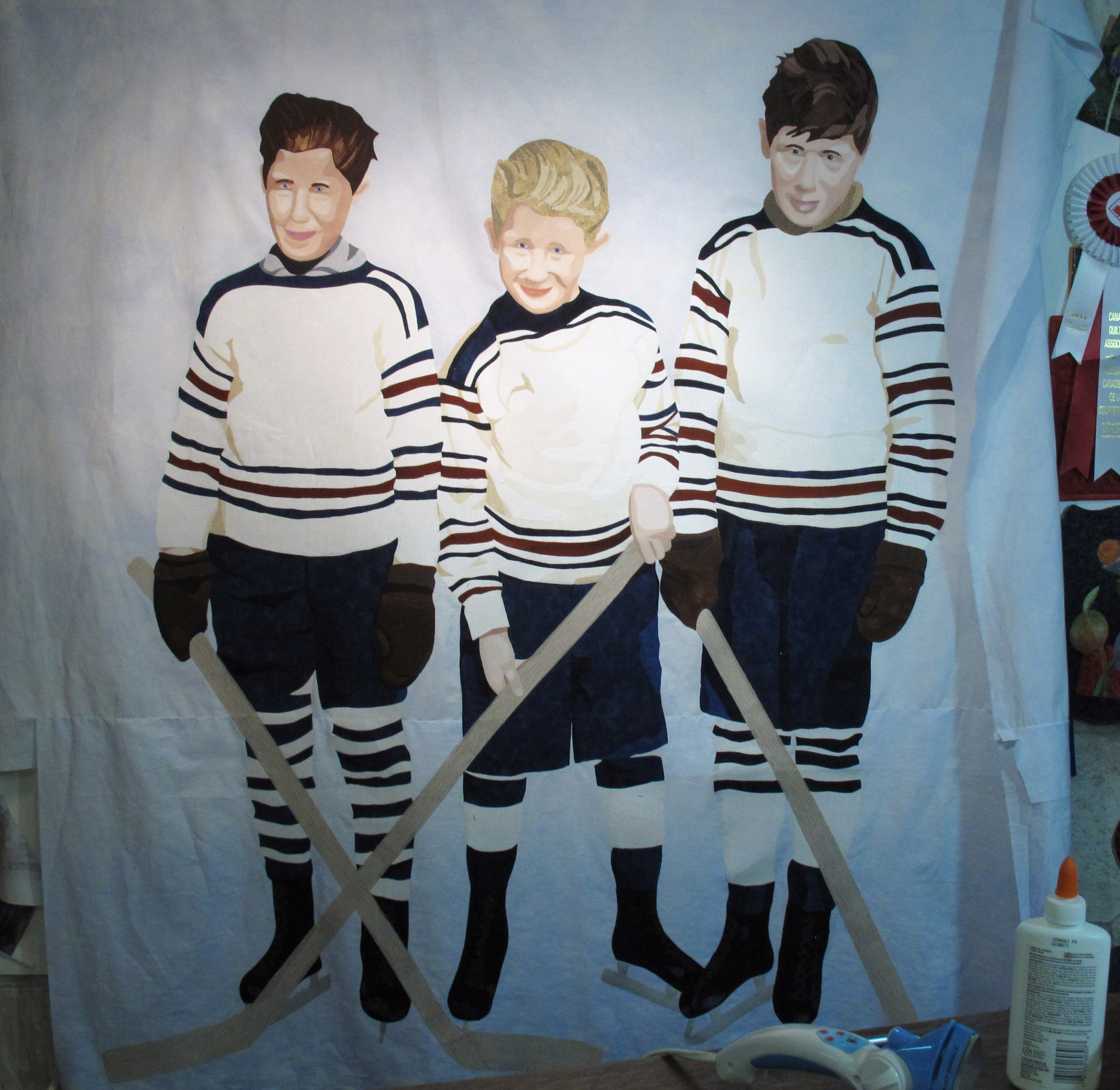 I am so glad that I got up the courage to correct this piece. As a result, I have learned that making a mistake is not necessarily the end of a piece. If you give yourself time to get some emotional distance from the problem and you open your mind to the possibility of rescue, amazing things can happen. Mistakes can be corrected.

Have you ever made a mistake or mistakes in a piece that you loved? What did you do about it?  I would love to hear about your experiences!

4 thoughts on “Correcting your Mistakes 101 – A Rescue Operation”